How To Stop Giving A SH*T All Of The Time “Life is too short to worry about what others say or think all the time. Be YOU and give ’em something to talk about!”

We all want to be valued and liked. We don’t want to be judged or do things that could embarrass us or make us out to be anything less than amazing.

I was a freshman in college sitting at the front of a huge lecture hall that sat 300 people in my abnormal psychology class.

On this particular morning I was feeling off. I woke up with a slight cramp in my stomach and figured it was a little bug or indigestion and would pass. I choked down a bowl of Honey Bunches of Oats and headed to class.

I was one of the students who loved to sit in front, so down the stadium seating stairs I went to sit, 5 rows from the stage where the professor stood.

About 15 minutes into class my stomach started cramping, bad! I felt my mouth starting to water and I knew what was going to happen next. I had bout 60 seconds before I was going to vomit all over the place. I had three choices:

1. I could jump up, squeeze past the 5 people sitting between me and the stairs, run up the stairs to the entrance, burst through the doors hoping I could remember where the bathroom was.

2. I could run down the stairs to the emergency exit that was to the side of the stage and closer, but then that risked me throwing up in front of everyone if I didn’t make it to the exit in time.

3. I could put my head down between my legs and throw up on the floor

Option 3 won. I was surprised with how quiet I actually threw up. It wasn’t violent gross, so I was hoping I only attracted the attention of a few people around me.

I had a sweatshirt tied around my waist that I proceeded to take off, place on top of my half-digested cereal and looked down at my sweatshirt wondering what to do.

No one has said anything so maybe no one noticed. I slunk down in my seat, looked at my watch and tuned out the professor waiting for class to end. The whole time I couldn’t help but think:

“What are these people around me thinking, probably that I am hungover.”

“What if there is someone in the class that I know, and they tell everyone else I know?”

“How can I ever come back to class after this, I probably should drop out!”

As the class ended, I sat there waiting for others to disperse and a kind guy asked me softly if I was ok, to which I replied, “Just a little embarrassed”. Then guess what happened, life went on. I went to class the next week, no one said anything to me (although I’m sure there was a reason I didn’t have a lot of people sitting directly next to me) but life went on and bonus, I probably gave a few people a funny story to share with their family over the holidays that year.

Why did I care so much? I didn’t hurt anyone by being sick. It wasn’t like I intentionally threw up in hopes of making the professor feel sorry for me so I would get an A. It just happened. It’s because was afraid of not being accepted, afraid of being laughed at and afraid of what impact this would have on my social life.

Fear of judgement, being embarrassed and non-acceptance is what fuels anxiety. While validation and the need to feel accepted and not judged is human nature to a certain degree, the more that approval and acceptance becomes important to you, the more you lose yourself.

Before we jump into not giving a shit, I think it’s important to point out that yes, sometimes you should give a shit in life.

When You Should Give A Sh*t…

• A co-worker you don’t particularly get along with is giving a presentation and keeps adding in little suck up remarks to your boss. You want to punch him in the face, but you care about your job, so you don’t.

• You are extremely tired after a long day and your best friend calls. You pick up the phone, she is upset and is crying because she got in a fight with her partner. Even though you are exhausted, you talk to her because you care about her situation and her feelings. (If you don’t’ have the energy to talk to your friend, don’t pick up the phone…that doesn’t mean you don’t care – you have the right to respect your energy – and you aren’t aware of her issue yet).

There are several other scenarios in life when you should give a shit. What I’m referencing when I say stop giving a shit is when you are afraid of being embarrassed or start selling yourself short because you think what someone else thinks (even a stranger) is more important than you living YOUR life.

• “Stop doing that, people are watching!”

• “What if I walk up in front of the room to accept my award and I trip?” (I can’t help but think of Jennifer Lawrence here, she handled herself with such grace! She acknowledged it and moved on like a boss!)

What you are doing at that point is allowing other people to redirect your thoughts and actions. Why do you care more about people pleasing or being liked or not being judged, than being yourself?

Not giving a shit doesn’t mean you don’t care about how your actions affect others, that would mean you are just be being a jerk!

• It’s about where you invest your time, energy and emotions.

• It means you are living a life that is designed by you, you’re creating your own recipe!

• It’s dismissing and not associating with the negative external forces that are not in your control.

By the way, this is sooooo much easier to say or read than to put into action because by nature, we care what other people think. So how do we do it? How do we stop?

– So go ahead and tell someone you are going to run that marathon you want to run. If you don’t end up doing it because you didn’t train properly, then who cares what they think!

– Go ahead and dance to that song in the grocery store that has your feet tapping. You probably won’t see the people in that store again and if you do, so what!

– Post that photo on Instagram that you REALLY want to but are a little self-conscious of because you gained weight during COVID quarantine!

Everywhere you go in life, people are going to judge you, it’s just the way it is. But what they think doesn’t matter in the long run. It’s your life.

Be a good person, be a kind person, have fun, laugh a lot and be you. Stop spending so much time on what other people think or you are going to miss out on living your life, for YOU! You just have to take that step and do it, that’s all up to you. 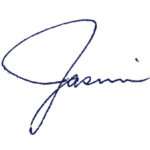