So, I have confession to make, vulnerability here we go. I sit on public toilet seats…ok there, I said it!

We live in a world of germ freaks; I am one of them. I use my elbow when pushing elevator buttons, I wipe down the seatbelt and tray table in the airplane and I have been that person who hovers over the toilet seat. However, I’ve recently decided to throw caution to the wind and sit my butt down! I know, some of you might be gagging at the mere thought of your skin touching that white porcelain throne, but hear me out. 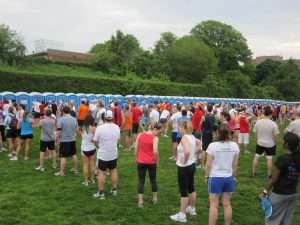 As I was running a half-marathon in June 2017, the line for the port-o-potties was at least 50 people deep and after 30 minutes in line, they announced it was time to line up for the start. I told myself that I didn’t have to go that bad and headed to the start line but ten miles into the run I knew I wasn’t going to make it another 3.1 miles without peeing myself. Kicking and screaming inside my head, I stopped off at the next port-o-potty. I was getting ready to assume the hover position and my legs just wouldn’t let me do it and there is was, my butt came into contact with the toilet seat, in a port-o-potty none the less! And yes, I am still alive today to write this blog.

Recently, these two experiences got me thinking, why are we so afraid of letting our butts touch where someone else’s butt was? You are far more likely to contract something from touching elevator buttons, your computer keyboard, or the menu at the restaurant that occasionally gets wiped down with that nasty rag that they dip into bleach water once a day and also wipe the tables down with. We shake peoples’ hands (we don’t know where those hands have been) and some countries even kiss on cheeks when they say hello. Let’s think about this, public bathrooms get cleaned usually once a day, many, multiple times a day. Don’t forget that Christmas party at your friends a few months back, did you hover or place toilet paper on the seat before you sat down? So…your friends butt germs are ok? 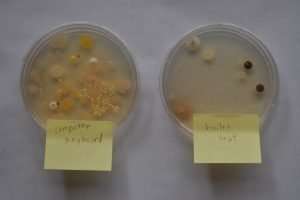 WHAT IS YOUR POINT???

Ok, so what is my point to all of this, what does talking about toilet seats have to do with self-care? Hang in there I’ll get to it, but first let’s chat a little more about germs.

According to a survey done by Dr. Hartley Rotbart, germs that cause most infections survive 30 minutes outside the body on most surfaces and the norovirus can live weeks! However, as long as you wash your hands before you touch your face, you should be fine. And he also found that 59% of women hover instead of sitting on public toilet seats. He states you can’t catch a disease by sitting where someone’s else’s butt has been unless you have a cut or sore on your butt, but even then, it’s still very unlikely. The latch that closes the stall door and the faucet are bigger sources of infection because you touch them after people have done their business, before their hands are washed. The late Abigail Salyers, PhD, former president of the Society for Microbiology said, “To my knowledge, no one has ever acquired an STD on a toilet seat –unless they were having sex on the toilet seat!”

This blog isn’t saying you should sit your butt on a toilet seat, it’s more or less suggesting you pick and choose what really is worth investing your time and energy into worrying about. If carrying around wet wipes to scrub the seat down and using tissue toilet protectors makes you happy, that is totally your prerogative. However, I believe all of us put a lot of our time and energy into stressing about little things in life that aren’t really that big of a deal because they are easier to fret about than putting our energy into the “bigger things” that matter the grand scheme of life.

“Will this matter a year from now?”

I received a book as a college graduation gift called “DON’T SWEAT THE SMALL STUFF…and it’s all small stuff”, by Richard Carlson, PhD. I pulled it out the other day as I have been a bit tense with, well…life! He talks about examples of “small stuff”, like someone cutting you off in traffic. Yelling, flipping them the bird, what good does that do? I feel like there are pieces of his book that are great [if you’ve read my blogs you know my view on self-help books, to each their own] but, I don’t feel like it’s my place to tell someone what small stuff is to them. Carlson says to ask yourself this, “Will this matter a year from now?” Only you can answer that.

For me a small thing not worth fretting over is the cashier forgetting to give me the $0.25 bag credit at the grocery store for bringing my own bag (If you are from California reading this; yes, in Colorado we get money back for bringing reusable bags when we shop). However, to someone on a fixed income, that $0.25 was their child’s milk money, not getting that bag credit is a big deal for them and is worth fretting over. (Side note, I don’t have children and haven’t been in grade school for over 30 years, so I honestly don’t know if kids even get milk in schools anymore or how much it costs; but you get the point).

Another “small stuff” I’m not fretting over is sitting on a toilet seat. I don’t want to put too much energy into thinking about where I sit my butt when my bladder is about to burst and I have bigger things to tackle outside of that bathroom. For you, the toilet seat might not be “small stuff”, maybe it’s a big deal to you, which is totally cool…more hover power to you my friend! But you know you have something, something that is your “small stuff” that you fret over and consumes too much of your time and energy. It’s taking time away from you thinking about, focusing on and finding solutions for those bigger things that are the real meat and potatoes of life.

Now don’t get me wrong, I always give my toilet seat a once over before I sit, and if there is urine splashed on the seat, of course I will endure that quad burn hover rather than sitting on pee, I’m not that gross! I will continue to use a paper towel to turn off the faucet and open the door handle in the bathroom, and will continue to put hand sanitizer on after I give the waitress back the menu (and don’t get me started on restaurant salt shakers, ewww). But now, more often than not, I will go ahead and let my booty rest comfortably on the seat, pee with the pleasure of knowing I’m saving my quad burn for my next leg day at the gym.

What are some of the small things you are fretting over today? Whatever they are, take a deep breath and remember you have 86,400 seconds in a day, don’t waste too many of those precious seconds fretting about the small stuff. Ask yourself, “Will this matter in a year from now?” and try letting go of maybe just one small thing.