“When I do good, I feel good” – Abraham Lincoln

I was having a conversation with my 15-year-old nephew a few weeks ago about a kid in his high school they call the “High five kid.” He tells people to have a great day then proceeds to give them a high five or fist bump. My nephew scoffed a little at this stating the kid did this every day and he didn’t believe he was being authentic and was possibly doing it for attention. I challenged him a bit and asked, “What if saying that to other people makes him feel good? What if he has a really $h!T+Y home life and going to school and wishing good vibes for other kids and giving them a high five or fist bump makes him feel good inside?” After a pleasant adult/freshman in high school discussion, it got him thinking. 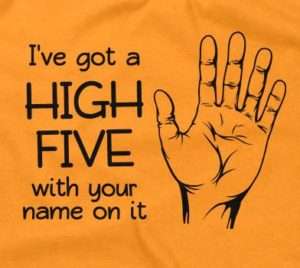 The reason I perked up when my nephew brought up this story was because I have been trying to be the “High five kid” from that high school for several months now. I actually always have been the person that hands out winter kits for the homeless, randomly purchases a meal for someone who looks like they might need a little help, or just helps someone to their car whose arms are too full with groceries. I even was the guide for a blind runner during a 5k, probably one of my most amazing experiences in life. I have always liked to do things that might bring a smile to someone else because it made me feel good inside to help someone. However, I found that after my divorce I just shut down and I stopped doing these things all together.

As a distance runner, I have experienced the transcendent runner’s high that you hear about (or maybe have experienced if you are a runner). This is not something a lot of people can say they have experienced, but have you ever experienced a “helpers high”? Have you ever had that rush after performing a good deed or making someone else feel good? The same type of thing happens during a helper’s high as it does during a runner’s high, your brain releases endorphins which are the feel-good chemical of the brain. If you aren’t a runner, doing a good deed is going to be a heck of a lot easier than running that 7 miles that it usually takes for that runners high to kick in. 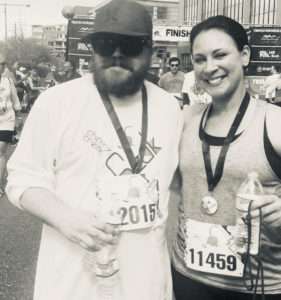 There are many studies out there on the relationship between happiness and doing good. When you are happy you want to spread joy and “do good” because it keeps you feeling good. When I wasn’t happy because of the devastation of my divorce, I found I wasn’t doing these things that had always made me feel good. However, as a psychology major, I knew it also works the other way around, so it was time to force myself to start “doing good to feel good.”

January 2019 was the first new year I was entering into being divorced. I have never really believed in New Year’s resolutions because I felt as if I was setting myself up to fail. I will admit, the new year is a good time to reset and I understand why people give themselves resolutions. For me I had always tried to keep it a bit broader, “5 things I would like to try this year” or “do my best to see my siblings more” then if I didn’t lose that 10 pounds, learn to play the guitar, or any other cliché resolution…I wouldn’t feel as if I’d failed. However, I wanted 2019 to be different. I told myself I was going to do an act of kindness every day (mind you, I was 4 months from my divorce being final at this point, probably not a good resolution if I’m still struggling with daily showers). A dear friend of mine heard this resolution and very tactfully and kindly suggested maybe rather than trying to keep that lofty resolution, I do what she does each year and give myself a word that I would like to live by for the year. Her word for that year, since she was getting ready to have a baby, was grace. She wanted to give herself grace for whatever lay ahead. I loved that idea and after over analyzing (as I tend to do) forty-eight words, I kept coming back to “happy.” I just wanted to be happier and also spread happiness when I could. 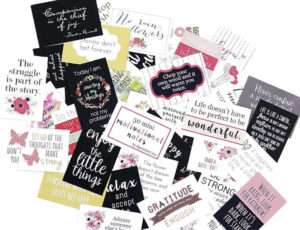 I started by purchasing these amazing little inspirational quote cards that I found on Amazon and I thought I would start at work since that was where I spent the majority of my time. Every day, I would be observant and would notice someone in the office that was being a little quieter than usual in a meeting or I would overhear them talking in the break room about a rough weekend and I would secretly leave a card on their desk, chair, office in-box or slip it under their door. A little buzz around the office started; people were wondering who was leaving the cards and I could see the smiles on people’s faces after receiving them. It made me feel good to brighten someone else’s day, even if I was having a crappy day myself. I was doing it, I was getting that “helpers high.”

I remember one day, after a very rough night of crying and missing Drew, I wasn’t sure I could make it into work the next day but, somehow, I pulled it together. I was flipping through my cards in my office with not a lot of thought on who could use a card that day. As I was filliping through them, I came across one that I knew was not meant for anyone else that day but me. “I am not what happened to me. I am what I choose to become.” I started crying as I read that card and I pinned it up in my office. I was the recipient of my inspirational card that day, and that was okay. I was using my friend’s New Year’s word and was giving myself grace for not having the energy to “run” the 7 miles to achieve my high that day. 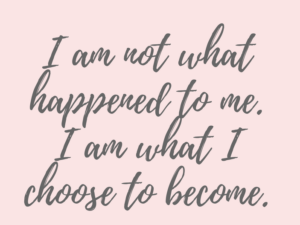 After a few weeks of leaving these cards at work, I started to spread the joy outside of work. I left one for my waitress when I was out to one of my first Saturday solo lunches. She was not the friendliest to me so I started to get a little bit irritated until I saw her walking into the back and another waitress was yelling at her, scolding her for something. I decided at that moment she might benefit from a card and I left her a card when I paid for the bill that said “Storms don’t last forever.” As I was walking out, I heard her say “thank you miss” (oh how I love being called miss). I turned around and she had a huge smile on her face and I saw she had the card in her hand. I certainly got my “helper’s high” that day.

Since that day I have ordered several boxes of those cards, and even had my own made up that simply say “You Got This!” I have left them on car windows, in public bathrooms, restaurants, buses, airports and really wherever I feel someone might need a pick me up. It makes me feel good knowing I might be helping someone else feel good. Now, don’t get me wrong, there are still days when I don’t have it in me to be uplifting and spread joy, but I can honestly say that by choosing the word “happy” this year, I am happier than I was 10 months ago. It’s taken a lot of work and I’m still working on it. You have to work at it every day and give yourself grace for those days when you don’t have the energy to work on achieving that “helpers high”. But isn’t it kind of neat to think that you can actually heal yourself a little by helping someone else feel good?

As Abraham Lincoln and my friend and founder of Tokyo Joe’s, Larry Leith, has said for years, “Do Good, Feel Good!” I encourage you to try to be that “High five kid” and do something good today that makes someone else feel good, in return it will make you feel good and help you achieve that “helper’s high”… or you can go out and run 7 miles, which one sounds easier?! 😊

Remember, You Got This!!!